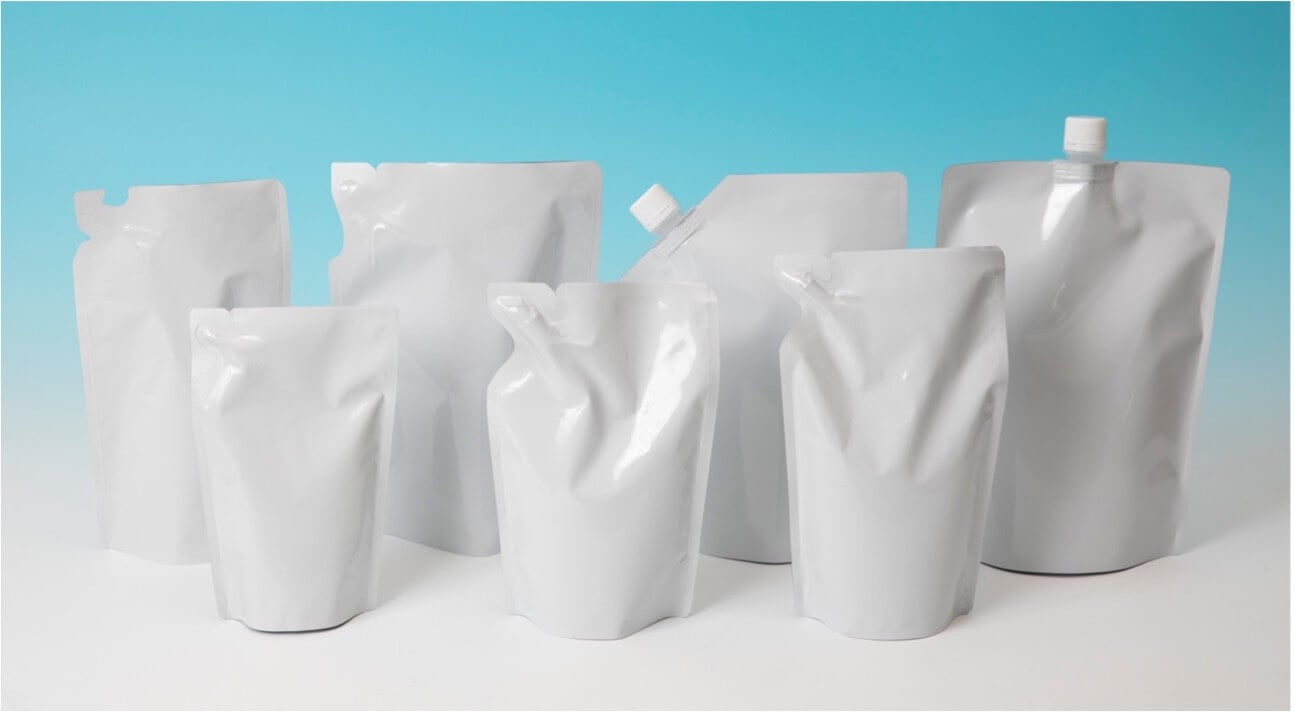 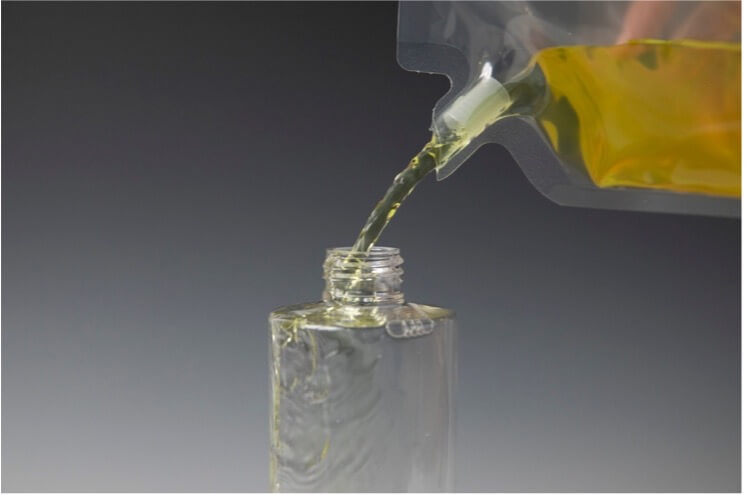 It was 1995. The New Business Planner at ZACROS saw a flexible stand-up pouch with the tube attached to the opening, manufactured by the Swiss packaging company at the EU trade show. Back in the 1990’s, Europe had started to address environmental concerns related to packaging, and the Swiss packaging manufacturer exhibited refill packaging as one of the sustainable solutions. Japan also started to see a heightened awareness of environmental issues, and he saw the potential opportunity with this tube-attached refill pouch in the Japanese market. Some refill packaging had started to enter the Japanese market, but the packaging was nothing like this new refill pouch.

When he saw this new refill pouch, he foresaw this as not only an environmentally friendly packaging option but also functional packaging, refilling without spillage. Immediately, he talked to his team and developed an understanding with his management. However, they did not get immediate approval due to the amount of investment necessary for this project to succeed, including patent fees, capital investment, and royalties to brokerage trading companies. Even though they did not gain approval, they did not give up.

“If it is impossible to get capital investment in advance, then we need to secure buyers.”

The team decided to talk to as many potential customers as possible. Many were interested in this new refill pouch, but the team could not secure guaranteed purchases. Especially for food applications, refill was not something to consider due to hygiene. With the feedback, the team decided to narrow down the targets to one target: detergent manufacturers.

Possibility – just at the right time

Even though many companies were interested in this new refill pouch, it did not completely convince them. The salesperson visited one of the major detergent manufacturers every morning before going to work, trying to establish a relationship. During one of their daily conversations, the customer mentioned that they were reconsidering their refill packaging because of a large number of complaints such as “difficult to refill,” “hands get dirty,” and “it takes time.” Right away, ZACROS was able to demonstrate this new refill pouch without leaking a drop. After seeing the demonstration, the detergent manufacturer decided to conduct an in-house monitor survey. In addition to the monitor survey, 16 items of required quality were obtained.

The top three items were:

This new refill pouch had almost satisfied all the conditions other than being able to be cut by hand. As negotiations with the detergent manufacturer took shape, unexpected requests came to ZACROS. According to a survey, consumers can only manage 200 mL of liquid refills in 15 seconds. Originally, the inner diameter of the tube of this refill pouch was 6 mm. However, with the 6 mm tube, it was impossible to refill within 15 seconds, so the pouch was modified to use a 9 mm tube.

Finally, ZACROS received an order from the detergent manufacturer in July 1996. The launch date of the new product was only half a year ahead of the time the team received the order. The team didn’t realize that they would face the hardest part from here.

In September 1996, the detergent manufacturer requested another 3,000 prototype refill pouches with the product name printed. At the time, ZACROS had not yet signed a contract with a Swiss packaging manufacturer. On top of that, ZACROS did not have any bag-making equipment. This required the R&D team to go to Switzerland to make samples to meet the customer’s request. At the end of October, ZACROS officially signed a formal patent agreement and acquired domestic sales right. Immediately after signing the agreement, ZACROS ordered the bag-making equipment, but the machine was not scheduled to arrive in the factory until December of that year. Usually, it takes two to three months to adjust machines to start mass production, but the product launch was scheduled for mid-March. To make the product launch timeline, the team needed to ship refill pouches by the end of January. Therefore, the team had less than a month from machine installation to shipping.

There was a lot of internal doubt, but the team believed in the product possibility. One person was in charge from the patent contract to manufacturing. He had been involved in the processing technology of the bag-making machine for many years. However, the technology he knew was so-called two-dimensional bag-making technology. The flexible pouch with tube required three-dimensional bag-making technology. Flowpack requires the tube to be inserted in the correct position at a 45-degree angle. In addition, the typical materials of Flowpack are Nylon, PET, and Polyethylene, which are stretched to the utmost limit—changing the tube diameter from 6mm to 9mm required the films to expand even further. Thus, breakage was unavoidable. He decided to visit the actual manufacturing facility in Switzerland and discovered that the breakage occurred at a rate of 1 to 2 pouches in 50 bags. He knew that the Japanese detergent manufacturer required higher yield and better quality. The biggest issue was that the team needed to change the 6 mm tube to a 9 mm tube and, at the same time, improve yield and quality. Trial and error began from there.

New challenges – the moment you say “I can’t”, everything is over.

Working with the machine manufacturer, the team continued to improve the mold but could not get a satisfactory result. However, they never gave up.

“No matter how often we fail, there will always be a way.” 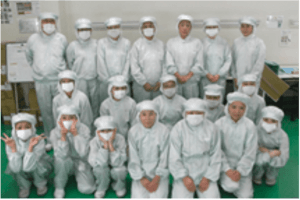 Then, as a result of making many iterations to determine the tolerance of the mold and repeatedly examining the temperature conditions, the wrinkles at the tube insertion part finally disappeared, eliminating the breakage issue.

As the quality became stable, the volume of orders from the detergent manufacturer increased sharply. As the orders increased, ZACROS needed to increase the number of machines. The typical delivery and installation time for new equipment was four months, but the customer had a fixed delivery date. The team needed to adjust and improve the machine while manufacturing. However, since the sizes and specifications of Flowpack differ from product to product, the team needed to make changes to the machine consistently. Besides, there was almost no tolerance between the printed design and the punching die position accuracy, so even a slight deviation of 0.1 mm would cause wrinkles in the insertion part, causing the liquid to leak from that spot. The detergent manufacturer has requested that leaks be kept under 5PPM (5/1,000,000), but the team could not reach the level. For that reason, manufacturing staff and personnel from all departments, including Sales, were putting in 100% inspection of every pouch from morning until night to meet the delivery date.

It took more than three years to stabilize the quality. Meanwhile, ZACROS introduced the tubeless Flowpack (Flowpack PL) in 1998 to decrease environmental impact by reducing plastics. The spout is beak-shaped, so changing the cut position allows for changing the opening diameter. Therefore, the outflow amount can be adjusted regardless of the viscosity of the contents. Flowpack PL is a versatile refill pouch that can handle any liquid. In addition, removing the tube allows ZACROS to offer a lower price to customers while keeping the functionality. By leveraging the Flowpack series, ZACROS has led the refill packaging industry in the Japanese market. Flowpack is the crystallization of the tireless efforts and passion of ZACROS’s employees over many years. Now, ZACROS manufactures over 500 million leak-proof pouches per year. Where there is ZACROS, there is a way.

Learn more about our Flowpack series and its benefits HERE.